Honeybees help farmers, but they don’t help the environment

Honeybees are amazing and adorable, and they suffer when people spray pesticides or mow down wildflowers. We’ve heard plenty in recent years about collapsing bee colonies.So Jonas Geldmann, at the University of Cambridge, says he understands how the honeybee became a symbol of environmental conservation. 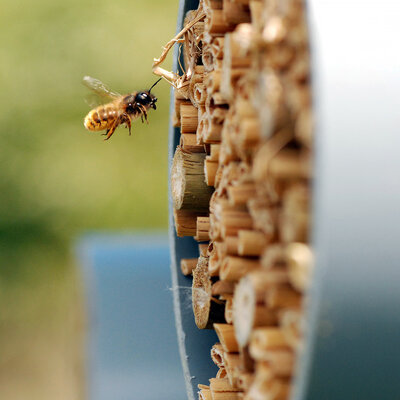 “Lots of conservation organizations are promoting local honey, and even promoting sponsorships of honeybees and that kind of stuff, and that increasingly annoyed me,” he says.

It annoyed him because the honeybee is perhaps the one type of bee that we should worry about the least. Honeybee hives aren’t natural, and they don’t help the environment. In fact, they may harm it.

There are thousands of bee species. Almost all of them live in the wild, hiding away in the ground or in odd cavities, like hollow plant stems. They play a vital role in the ecosystem, pollinating flowering plants. Many are in peril; some species have disappeared.